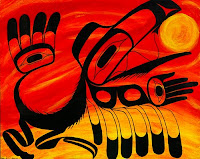 Lattimer Gallery recently received a striking painting from talented Heiltsuk artist, Ian Reid. It is titled 'The Day Raven Walked Off with the Sun'. Ian describes this cultural story in his own words:

"As it was in the beginning, when all was dark and black as night, the Raven had a beautiful song voice and was still mysterious as ever. He knew of where the sun, moon, and stars were. They were contained in cedar bent boxes in the Chief’s house, past the clouds, in the Heavens. Raven, the trickster, was able to transform himself into many things, including raven and human. He was able to transform and trick his way into the Chief-of-Heaven’s house. While visiting, he was able to find those boxes and had the idea of opening them to the universe. He transformed into a bird form again and tried to fly away with the sun, moon, and stars. Upon flying out of the Chief’s house, he lost his song voice and coloured feathers, and since then he has been black as night and simply just kaa kaa-ed! However, he made it to freedom and set the moon, sun, and stars free. It still is today as it was then, when Raven brought light to our world. The day the Raven walked off with the sun, he was in the shape of the raven AND human. His hand was on his wing, and the talons he was walking with were once human feet."